STRATEGIC ALLIANCE OR TEMPORARY AMITY? WHAT ERDOĞAN’S TRİP TO IRAN MAY SIGNIFY 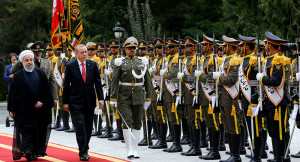 Turkish President Recep Tayyip Erdogan is in Iran on Wednesday for talks with his Iranian counterpart Hassan Rouhani and Iran's Supreme Leader Ayatollah Ali Khamenei. Political analysts interviewed by Sputnik Turkiye commented on the possible outcome of the visit and what it could actually signal.

Turkish political scientist Rafet Aslantaş, director of the Institute for Strategic Studies ANKA (Ankara), pointed out that although Erdogan's trip to Tehran is being presented as a reciprocal visit after President Rouhani came over to Turkey in April of 2016, given the current escalation of tensions in the region, it is of much more importance than just a mere "courtesy visit."

He noted that the leaders' meeting comes in the wake of the recent independence referendum in Iraqi Kurdistan and amid the ongoing Astana peace process, aimed at settling the Syrian military conflict. This demonstrates that Ankara and Tehran have a common understanding of the joint aims, tasks and threats the two countries are currently facing.

"The processes which have been developing under the leadership of Iraqi Kurdistan President Masoud Barzani before and after the referendum affect the issue of security, which is very sensitive for both Turkey and Iran. Neither country finds Barzani's statements that the voting poses no threat to the two states convincing," he told Sputnik.

Hormoz Jafari, an Iranian expert in Middle Eastern affairs, pointed out that although Iran and Turkey differently interpret the threats emanating from Iraqi Kurdistan, historically the two countries were always able to join Arabic Iraq and Syria in finding right responses to Kurdish nationalism. He also noted that the issue is now of more concern to Turkey than to Iran.

On Tuesday, Iran announced that it has closed border checkpoints with Iraqi Kurdistan in order to respect Iraq's sovereignty and territorial integrity.

Commenting on the move, Rafet Aslantaş said that Iran regards the Iraqi territory and the zone increasingly interesting in terms of the further extension of its influence.

"Iran has been exerting certain influence on the central governmental institutions of Iraq. By doing so, Tehran tried to safeguard, first of all, its border security and, to the extent possible, tried to spread the so-called "Shia crescent" strategy. Iran apparently does not want to lose these advantages," he told Sputnik.

Besides, he went on to say, Tehran is concerned that after the referendum, chances are high that the Kurdish state could be established on its borders, which could facilitate separatist sentiments within Iran.

As for Turkey, amid its 30-year-long confrontation with the Kurdistan Workers' Party (PKK), the setup of governmental structures in Kurdish territories in the north of Syria and Barzani's vote, Ankara is concerned that the situation in the region is getting out of control and becoming more unpredictable, he said, adding that it is becoming evident that there are very serious powers behind these processes.

"Taking into account all the above, Ankara and Tehran have realized the importance of the joint cooperation and joint counteraction to the regional threats. Moreover, cooperation has become, in fact, inevitable. The most important thing for the two countries to do now is to demonstrate the sincerity of their intentions and the continuity of their allied ties," he said.

Rafet Aslantaş also pointed out that the Astana peace process had also played a certain role in rapprochement between the two countries. The strong influence of Russia's decisive stance prompted Ankara and Tehran to start searching for common grounds in their geopolitical interests. It would come as no surprise if they now decide on the settlement of the crisis in the northern territories of Iraq.

Moreover, he said, the two countries should act in cooperation in order not to become losers in the geopolitical game.

"There are factors which impede the cooperation between Turkey and Iran. Global players are now redrawing the zones of their influence in Syria and Iraq, which affects all the countries of the region. In the nearest future, it's very probable that we could see major bargaining for the Caucasus. In such conditions, the countries of the region should join in their efforts to avoid being a losing party," the expert said.

Hormoz Jafari meanwhile noted that Turkey has shifted its priorities from the ousting of President Assad towards protecting its national security from Syrian Kurdistan and its People’s Protection Units (YPG), which it has branded a branch of Turkey's PKK. This prompted Ankara to join the Russia-Iran partnership, which has been clearly demonstrated in discussions of operations to liberate Idlib and Syria's northern territories from terrorists.

The expert also suggested that Turkey and Iran could cooperate on the settlement of the Qatari crisis. Doha is becoming a regional rival of Saudi Arabia. Riyadh, which is acting as a senior in the region, demands the submission of the neighboring countries, which have resulted in the tensions between the two countries and the crisis in the Persian Gulf.

Iran has become Qatar's only ally in the region, he said. However, Turkey is also on good terms with Doha; it has a military base in this country and provides assistance to it. Thus Turkey and Iran could cooperate on the issue.

Further discussion could be on the agenda for President Erdogan's trip, the experts concluded.